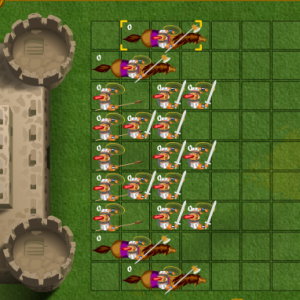 In this “sequel” to the strategy war game Genghis Khan, you must conquer the ancient world of Alexander the Great. Select your troops, but choose wisely based on the amount of gold you have available. Marshal your troops and take out your enemies. Note: See below game for instructions and tips.

Instructions: Use your mouse to select troops and control their movements. It’s a good idea to watch the battlefield and position your own troops in areas where your enemy is likely to attack. When deciding how aggressive your troops should be, it’s also a good idea to think about surrounding terrain (it’s tough to maintain an aggressive attack when you’re constantly climbing up and down hills). Remember that it’s okay to retreat in the face of overwhelming odds. Also, you can heal your troops during a battle, but it’ll cost you gold.