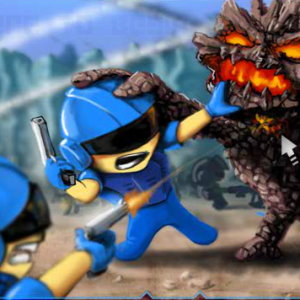 Humans have discovered a new energy supply on a remote, rocky planet. Unfortunately, it turned out to be inhabited by hostile rock monsters! Destroy them so we can get the energy we need to survive. You’ll get access to more and more powerful soldiers and weapons, but they tend to cost more as you advance. Note: See below game for instructions and tips, plus a cool Rock Monster music video (from Veggietales)!

Instructions: Use your mouse to select units, then use the A or D keys to move them forward.  Note that some units, such as mines and machine gun emplacements, are stationary. Your units can’t move beyond the farthest unit in the field. So, for instance, if you’ve got one gunner in the middle of the screen, none of your other gunners can move past him. You’ll need to start up your energy generators in order to teleport more units to aid in your defense. The generators can also defend themselves, but it costs energy. Don’t put mines too close to your units, because when they blow up, they’ll also blow up your own troops. Tanks are similar — when they get defeated, they blow up to kill a few more rock monsters.

Speaking of which, here’s Rock Monster (a parody of Rock Lobster from the B-52s):