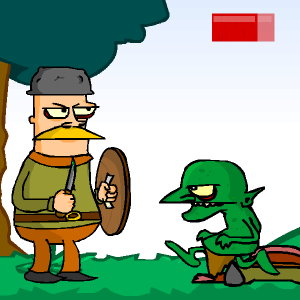 Choose your character: warrior, traitor, jester, or alchemist — then defeat the Brotherhood of Morbus and stop them from using the magical Book of Diseases to destroy the world. Upgrade weapons and armor along the way. In Morbus, you’ll fight green goblins, evil mushrooms, wizards, demons, and other monsters. Oh, and you rescue a giant bug, too. Note: See below game for instructions and tips.

Instructions: Use arrow keys to move and jump. A = attack; S = shield; D = use/talk; F/G = inventory; 1-9 keys = select items in inventory; Down-arrow = special attack; Enter = suicide. One good attack in the early stages of the game is to simply hold your A button down when meeting an enemy. You’ll take some damage, but your health comes back after a while. Fighting and running away sometimes works, but be aware that your enemy’s health will come back as well. If you’re up against some weak opponents, it can save you some time to get them together so that you can hit both of them at once.