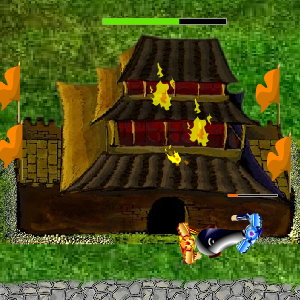 In the Qin dynasty of ancient China, First Emperor Qin has demanded that all his lands be pacified and brought under control. He has grand visions of a great wall surrounding his lands, but he needs money to build it. That’s where you come in. Lead your troops against the attacking hordes, or defend your own castle from them, and be sure to collect as much gold as possible to send to your emperor. Note: See below game for instructions and tips.

Instructions: Use your mouse to select and guide your troops; arrow keys allow you to look around the land. You’ll need to get at least 5,000 gold pieces per mission to keep the emperor happy. Otherwise, he’ll pull 250 gold from your treasury as punishment. Use your gold before and during the game to purchase military units, but remember to keep some gold aside to provide your emperor.

The in-game instructions will also help in showing how to move individual units as well as groups of military units. Also, be aware that your enemy is smart enough to attack on multiple fronts. Keep an eye on the playing field to prevent him from sneaking past you.